BAND or: who are the Wolves

Born in 2007 as a jaded individual's creative outlet, Ever Circling Wolves has grown during their 10 years of existence into an organic collective of people with a variety of visions and the will and skill to bring those visions together. Two EPs and two full-length records under their belt, the band has shown constant evolution towards a perhaps unattainable pinnacle of sublime: that, where the painful meets the beautiful. 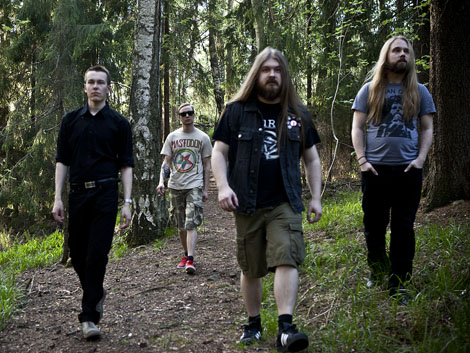 Ever Circling Wolves came to be in early 2007 as Henri Harell's (guitar, vocals) solo project. Having written and recorded the demo EP ”Picturesque, Petrified”, he saw the potential in the concept and set out to find co-musicians to turn the project into a band.

The first stable line-up got together in late 2008 with Arttu Kantola on bass, Otto Forsberg on guitar and Niko Karjalainen on drums, and so the sound developed into something bigger and better. This line-up recorded the debut full-length The Silence from Your Room and played the first live gigs the band saw.

In 2010, Arttu left the band and was eventually replaced by Sami Nevala, thus cementing the band's line-up for years to come. With Sami on board, the EP "Chapter III" was recorded, released digitally in early 2011 and on CD-r by Dethroned Productions (a sub-label of Throne Records) in December of that year. Around this time, new songs also started to take shape.

In a strangely creative state of mind, an album's worth of material was soon ready to be rehearsed, rearranged, re-rehearsed and then recorded. In April 2012, the band entered the studio to begin a long and arduous journey to record their second full-length Of Woe or: How I Learned to Stop Worrying and Love the Gloom. Playing a couple of gigs per year and recording when time would allow, it took until the end of 2014 to actually get everything on tape (or, rather, hard drive).

Things finally picked up in 2016 with a release deal from Cimmerian Shade Recordings, and so Of Woe... was finally released on CD, cassette and digitally in January 2017 with vinyl to follow later. It was also decided that Eero Järvenpää, who had been filling in for Niko in rehearsals and at gigs for some years already due to Niko moving out of the capital region of Finland, would become a full-fledged member of the band.

Now, eyes turned towards the often-difficult third album and two drummers in tow, Ever Circling Wolves are about to generate momentum once more...